In their review of the project, the jurors called it “beautifully restrained,&rdquo; noting that it revealed a “clarity, simplicity, and depth of understanding of the space.&rdquo; The project&rsquo;s site strategy was praised for “[claiming] the site without dominating it.&rdquo;

KRA&rsquo;S Elizabeth Morgan reflects on the project&rsquo;s development to date:

This project began with a phone call from Tim Tomlinson, a general contractor in Western Massachusetts with whom we&rsquo;ve worked on a range of residential projects. Tim had purchased a site in Hadley, MA a few years ago as a development investment.

When he called, he explained that he didn&rsquo;t want to build a spec house and hope for the best “the market is too tenuous right now for such a risky move. So instead, he asked us to work with him to develop a comprehensive design for the site that included a small cluster of sustainable homes.

Hadley is an agricultural community spread across the plain of a river valley. Located between two college towns, it is a place with an iconic vernacular history of farmhouses and tobacco barns. The site, a seven-acre parcel near Amherst&rsquo;s downtown and Hadley&rsquo;s commercial district, is a rolling meadow that can accommodate three building lots. As planned, the property preserves two acres of shared open space that can never be developed. 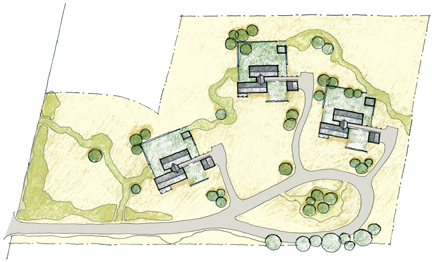 Although the site is on the edge of a suburban zone, it is distinctly rural in character. We felt that the natural qualities of the site could be maintained if we conceived of outdoor spaces around each home as small jewels of manicured space set into an otherwise uncultivated landscape. 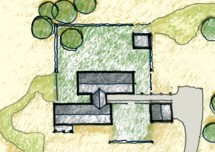 For the houses, we developed a design for a single-story, 2,000 square foot home with three bedrooms. The size, layout, and spaces can accommodate a variety of homeowners, from new families with children to recent retirees.

The design of the house is inspired by the tobacco barns and farmhouses of Hadley. We wanted to evoke the traditional architecture of the area, while still creating something in-line with our more modern aesthetic as designers. We also felt that this “modern vernacular&rdquo; approach to the project would appeal to a broad range of homeowners. The simple geometric forms of the building are easy to construct and formally distinct. They are both modern and traditional, crisp and inviting. 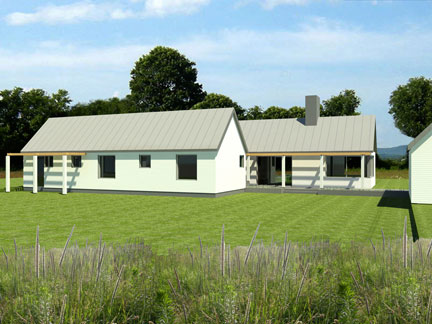 In response to the program, we broke up mass of the house by separating it into a living zone and a sleeping zone. With this approach, we maximized views out and sunlight into the spaces. The climate of each volume can be controlled independently, since the spaces would be naturally trading-off the times they were most in use—the living volume during the day and the sleeping volume at night. 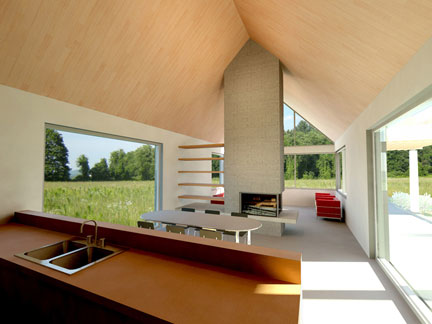 We staggered these volumes on the site to create a semiprivate zone in the front of the house that was south facing. Rather than a singular object in a field, the houses appear as clusters of outbuildings and barns and create a series of outdoor rooms with different scales, orientations, and characters. 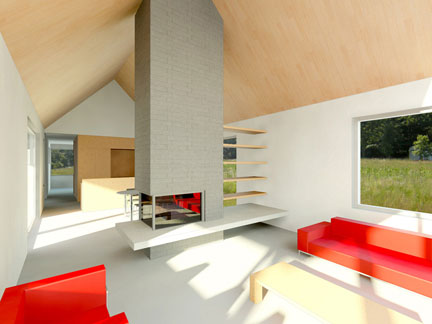 The project began with a phone call. It ends—for now—with a hope. That people will want to build the houses we&rsquo;ve designed—on this site or another.

That they will want to live and grow old within a timeless house that is rooted to its region, in context with its surroundings. And if they build at the Hadley site, we hope, above all, that the meadow will thrive.