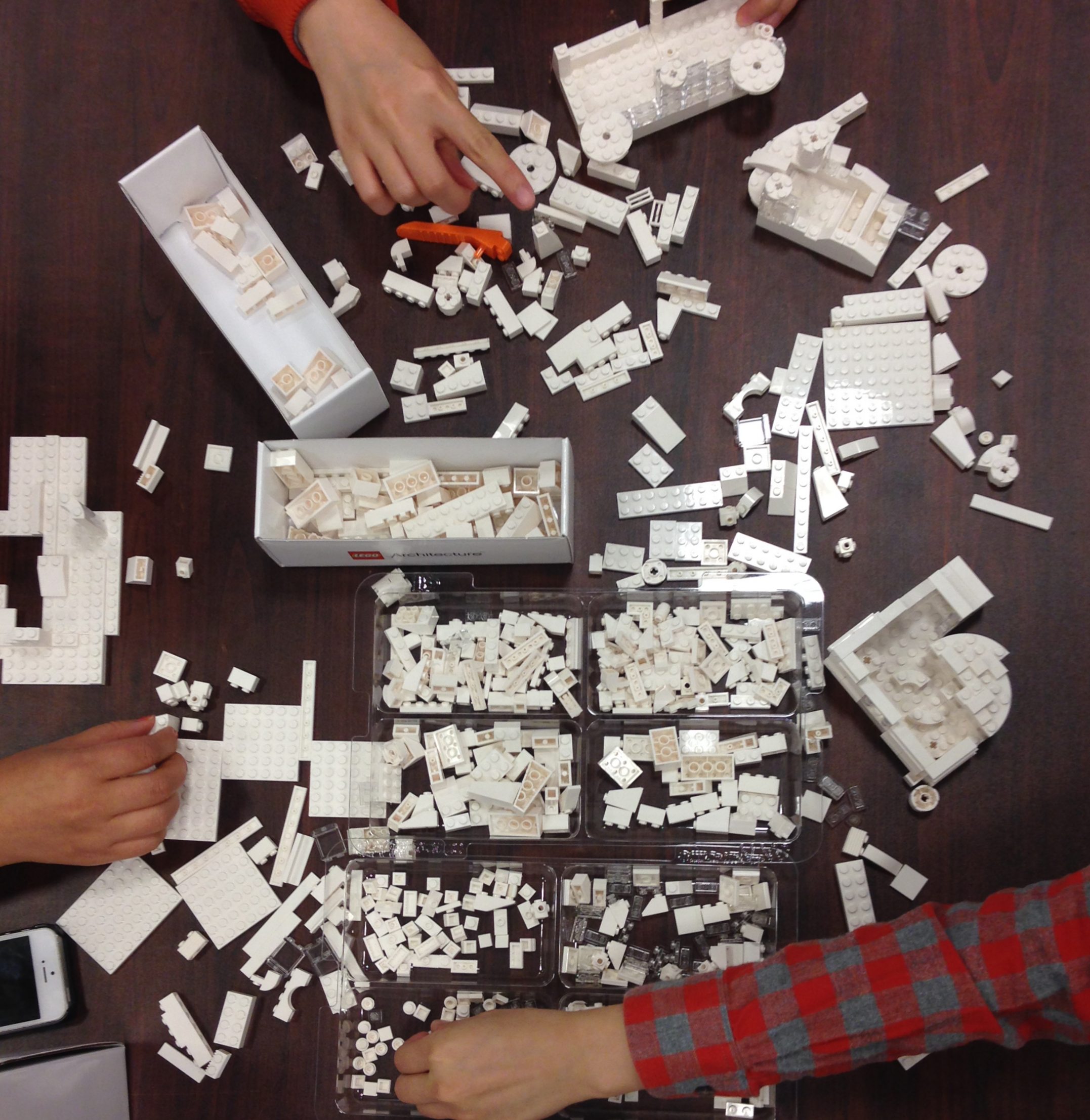 This past weekend I spent a couple hours at our local Barnes and Noble Bookstore facilitating a low-key workshop with the LEGO Architecture Studio set.  It turned out to be a bunch of fun and a profound way to explore architectural principles with those without any architectural training and unfamiliar with the enigmatic lingo of architects.

I’ve been a LEGO builder since way back and it is certainly a reason that my life headed towards building and architecture.  I love the simple tactile pleasure of putting pieces together and I love playing and imagining with the finished creation.  Even now, I get great pleasure out of paging through a set of LEGO directions – they have the same kind of logic and beauty as a well-crafted construction document set for a building.

LEGOs, in the past ten or so years, have really undergone a transformation – with the company stretching out in a lot of different directions (like the movies, and computer games).  At the core, though, LEGO is still a company that sells plastic toys to kids. And that’s fine, I was one of those kids (my desire for last year’s TGV set suggests that I’m still one of those kids…).  But, what Lego is selling, and what parents are buying, is something different than plastic toys: they are selling creativity.

There is a dissociation between buying a set and building a preordained, designed-to-the-brick model, and the boundlessly creative clean-slate that LEGOs purport themselves to be.  This is particularly true for us grown-ups.  Gone are the days when simply holding a LEGO pirate ship inspired an entire day of imagination and play for me.  And I suspect that most adults share my inability to do something as simple as build a house when faced with a pile of bricks in a whole mish-mash of colors.  The simple presence (or purchase) of LEGOs does not assure creativity.

Which brings us back to the Lego Architecture set: I was really impressed by this set and the way that it facilitated some real creativity for me and for the members of the workshop.  The Set is around 1200 pieces, primarily white, with a good amount of clear as well.  The importance of the monotone white shouldn’t be understated; it really allowed the builder to focus on the shape, space, and form of the creation, rather than the miss-matching of colors.  I was pleasantly surprised with the selection of pieces – I kept finding new ones to use – even when I thought I’d used all of the options.  I was also pleased with the scale, from 1x1s up to some decent sized plates. Even the cardboard box shows thoughtfulness, with some trays to help the pieces stay on the table and in a central place.  I would say the set is big enough to keep about 5 people building, any more than that would be too many.  The Studio set would be fun for most any age, I suspect, but I think it does a really good job at removing ‘unfun’ barriers, like color, for us grownups who find it hard to focus on being creative, and, let’s be honest, find it hard to allow ourselves to play.

In essence, that’s what the workshop turned out to be – an opportunity for us, a range of ages from early twenties to middle-aged, to play and explore the LEGO set. 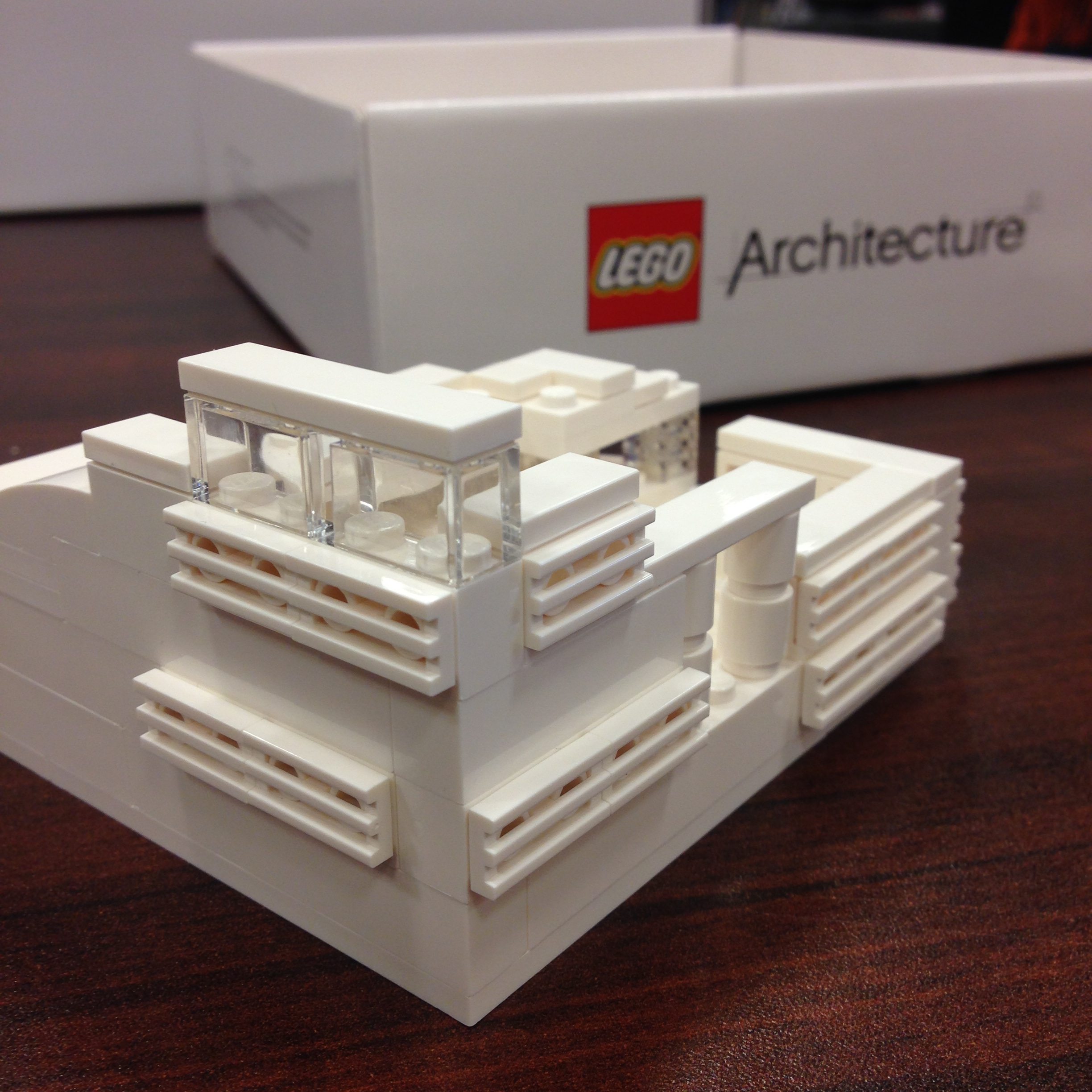 I was unsure how much structure the attendees would be looking for and so I had us start out with the simple architectural task of making sketch models – we gathered around 20-30 pieces and took 5 minutes to make a model, just letting the pieces be our guide and not judging the outcome.  We did this twice and then I asked the builders to take a concept – a shape, a piece, an idea – from each of those sketches and incorporate them into a more advanced model.  We took about a half hour on that third model and then we talked as a group about our impressions of our own models.

The best part about facilitating a LEGO workshop is that the people who sign up will already love LEGOs: for the last hour we worked on a final piece that pursued ideas from the earlier models and it was really cool to sit with a group of strangers, all of us completely absorbed in the task of creating with bricks.

I was especially impressed with what was created, and the willingness of the participants to ‘go there’: to imagine these plastic hand-held models as habitable spaces many many times larger (I had to re-learn that in architecture school – the skill that I had as a child playing with LEGOs having atrophied).  Also impressive were how many architectural concepts were revealed in these quick exercises: civic vs. residential form, hard vs. porous, organic vs. man-made, symmetry vs. asymmetry, site as canvas, historical reference, bottom-middle-top, and many more.  I was happy to share my experience as a builder, student, and now architectural intern pursuing licensure, but I was really struck by the quality of the creations from the participants.  I actually learned a lot from other people’s models – seeing them work in concepts I hadn’t considered, or, for instance, the happy accident of seeing that the pieces used to make a texture on one side of a wall had an entirely different, but equally compelling texture on the inside. 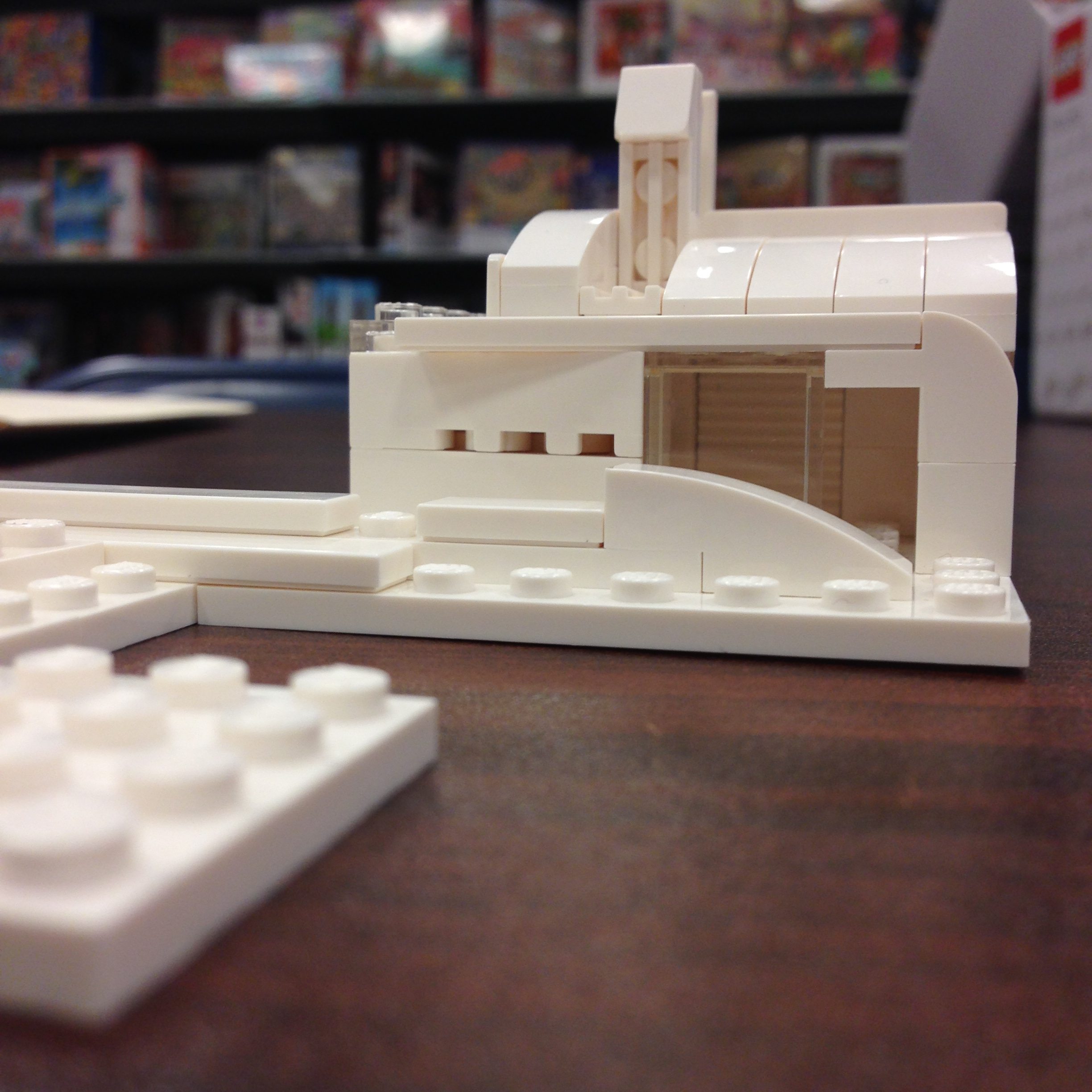 All in all, it was a great opportunity for me to share my experience of architecture with others; but, even more than that, the Studio set provided an ideal foundation for the entire team to explore the architectural impulse we have in common.