On recent renovation projects, we have needed to understand the shear strength of existing masonry, both to confirm adequate shear resistance in the existing structure and to engineer additional shear-resisting components when necessary. Here are two methods our engineers have used to evaluate this.

Method A: The head joint on either side of a single brick is removed using an ArborTech head joint saw. A stainless steel bladder is inserted into the void on one side of the brick. A movement indicator is hot-melt glued to the other end of the brick and a metal stop is glued to the adjacent brick. Hydraulic fluid is then pumped slowly into the bladder until the brick is pushed toward the void on the opposite side. The movement indicator shows how much the brick moved. This reading, along with the area of the brick bed joints and the hydraulic pressure, is plugged into a formula which results in a number which indicates the wall’s ability to resist shear. 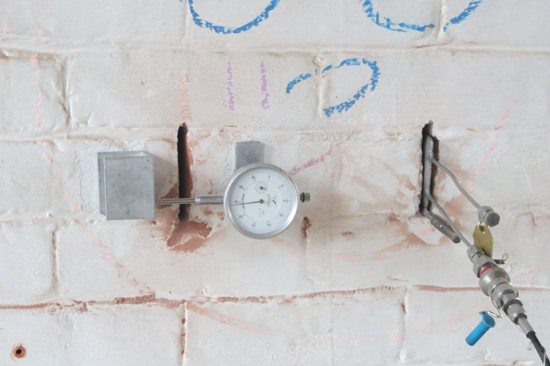 Method B: Another way of testing is called the “shove test.” The tester has a small hydraulic jack with a load gauge that is installed within the wall.  Similar to Method A, the jack increases pressure on the adjacent brick until sliding occurs. Some feel that a displacement gauge is not necessary, since the sliding occurs suddenly in a brittle failure mode, and the load usually falls off dramatically. 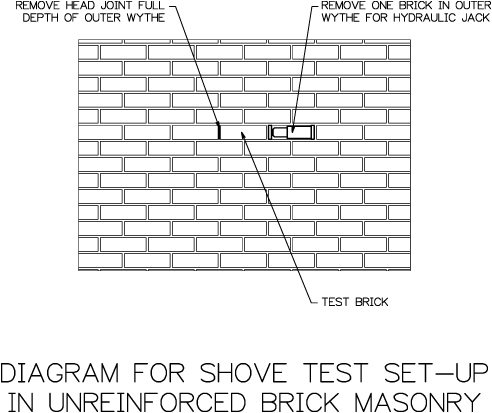 Because Method B requires the removal of an entire brick, it is good to have a mason on site when testing. With Method A, only the head joints are removed, making a mason's presence during testing less critical.